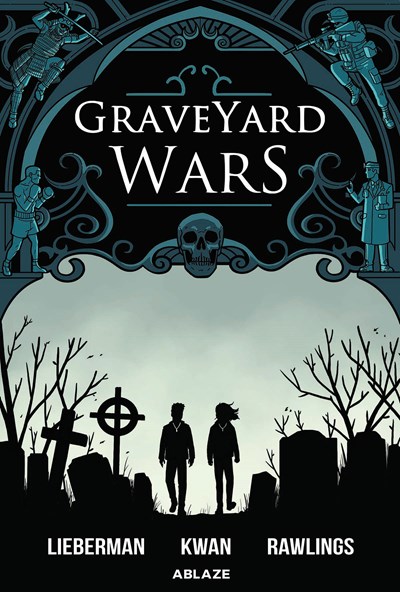 There are those among us, all of whom have had near death experiences, who now have an ability called a Soul-Skill which allows them access to the skill-sets of the dead; fighter, mechanic, sniper. Anything. This ability connects them in this realm to the soul, and its skill, in the next. Pilot. Hacker. Assassin. Anything.

While not everyone who touches death is able to retain this ability those who do have formed two warring guilds: Caretakers and Dark Hearts. The Caretaker’s mission? To use the power of the dead to protect the living. Welcome to Graveyard Wars.

All his life Ethan Noble felt he was different; unstable, crazy. How else to explain his ability to master so many different skills only to have them vanish time after time. All her life Carter Noble has tried in vain to help her brother. Raise him, shield him, understand him. An impossible task, even for a twin, because no matter how hard Ethan tried to explain his behavior Carter was never able to understand and any attempt to enlist help from Sebastian, their father, was met with an icy stare and stony silence.

What all three Nobles will soon learn is that in a world where the secrets someone takes to their grave are no longer safe you need family more then ever. The problem? When Ethan and Carter uncover a network of lies that led to their mother’s death they’re lead straight to their father.

Check out the interview with Ablaze Comics for Graveyard Wars below!

ABLAZE:  How did GRAVEYARD WARS come about as a project?

AJ Lieberman: If you mix the right amount of prescription antihistamines with large doses of Red Bull you’d be amazed at what you can come up with.  Also, I have a fascination with people who are convinced they can communicate with the dead – clairvoyants, spiritualists, mediums – there’s a lot of showmanship with most but a few are seemingly genuine.  The leap I made was wondering what connected the ones that did seem to have some kind of… extra connection to the dead and, for me, the answer was: near death experiences.

ABLAZE:  How did Chad Stahelski, John Wick franchise director, and his company 87Eleven, get involved with the book as executive producers?

AJ Lieberman: It’s amazing, right?  An absolute dream.  Chad was, a while back, attached to the feature version of one of my other books (COWBOY, NINJA, VIKING). Through that relationship I got Chad a preview of GRAVEYAWRD WARS.  It’s really the perfect merging of story and a director’s sensibility / talent.

ABLAZE: In terms of audience, who is GRAVEYARD WARS for?  What age range do you see this appealing most to?

AJ Lieberman:  Let’s forget age for a moment.  It’s really for anyone who likes dark stories; stories that involve family betrayals and secrets (that literally aren’t revealed until the last page of the book).

It’s also for anyone who LOVES ACTION … but action like it’s never been seen before.  Because of the ability of these characters to access the skills of the dead, a fight between two people is really a fight between those two people and all the different fighters / killers they grab while fighting -- so what a reader sees is the two fighters “ghosted” with 2 “soul skills”.  The pages can get crowded as they grab and discard skills.

Which brings me to the art.  If you’re a reader who puts art before story, then we got you covered there as well.  Andrew Sebastian Kwan KICKED ASS doing the all the action sequences but also brought the drama between the twin siblings into poignant focus.

ABLAZE:  You chose to do this in spot color, instead of full color. Why? What went into your decision to do so?

AJ Lieberman:  Two factors – story and art – Andrew had fully colored a few pages but something just felt off about this type of story rendered in such “real life” detail – the thought was that we wanted a much more muted approach to the story and once Darren & Andrew came up with the color design I thought it was perfect with Andrew’s art.

Andrew Sebastian Kwan: An illustrator from Toronto, Canada.  Influenced by anime, caped crusaders, and movie about galaxies far, far away, Andrew has a passion for creating comics, telling stories and moonlights as a poster artists and graphic designer.