Los Angeles, CA - January 12, 2020. Husband and wife writers, Jason Inman (“Super Soldiers” , “Love is Love” ), and Ashley Victoria Robinson (“Science! The Elements of Dark Energy” , “Aurora and the Eagle” ), and artist Ben Matsuya (“Midnight Massacre” ), have teamed up - again - with publisher Action Lab Entertainment (“Princeless” , “Miraculous ), to bring back the second installment in the best-selling comic book series: Jupiter Jet. Volume 2 will be titled Jupiter Jet and the Forgotten Radio and sees the protagonist, Jacqueline "Jacky" Johnson taking the fight for justice from her neighborhood of Olympic Heights to the stars - and beyond!

The hosts of the popular podcast Geek History Lesson are back with a campaign that features script and portfolio reviews for themselves (Ashley served as the former Head Editor at Top Cow), and Big Two comic creators such as: Steve Lieber (Superman’s Pal: Jimmy Olsen, Detective Comics), Mitch Gerads (Sheriff of Babylon, Batman), and David Booher (Canto, Alien Bounty Hunter). With superstar artist of Black Magick and Wonder Woman, Nicola Scott, returning to contribute a print to the campaign and Jupiter Jet staple Jonboy Meyers (Superman, Teen Titans), providing the second cover for the series.

Back by popular demand, Jupiter Jet and the Forgotten Radio picks up one year after orphan Jacky Johnson inherited her father’s jetpack with a mysterious power source. Now she truly is the hero Olympic Heights needs - she is Jupiter Jet!

But she still doesn’t feel right. It’s hard to protect the world when you recently learned that all of space is open to you! Feeling stifled by the Resistance and all the adults in her life, 17-year-old Jupiter Jet flies beyond the atmosphere of her world to face a new threat!

The first volume of Jupiter Jet was described as “Kim Possible meets The Rocketeer”, but now Jacky has the confidence of knowing who she is and the solar system is a little scarier, so Jupiter Jet and the Forgotten Radio holds more shades of The Man with No Name than it had before.

The never-before-seen “Black Flier” catches Jupiter Jet’s eye and lures her into space, despite the protestations of The Children of Gaia. But, she is a hero of action and ready to take on problems headfirst and soon finds herself in a bigger web of red rocks, asteroids, and strange bedfellows.

Including coming face-to-face with the new villain …

(Whose “Black Flier” Jacky turns out to be closer to than she ever could have imagined!)

With his sister up in space, Jacky’s brother (breakout character, Chuck!), discovers a long forgotten radio broadcasting a message from their father … that just might be for the enigmatic “Black Flier”! What does it mean? How long has it been broadcasting? Will Chuck get a costume and a codename in this volume? You’ll have to read it to find out! 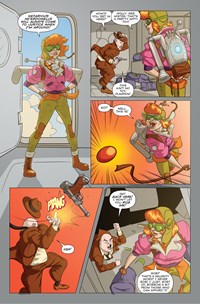 When Kim Possible meets A Fistful of Dollars inside the pages of a graphic novel you get Jupiter Jet and the Forgotten Radio.One girl’s journey on the brink of adulthood to remind herself that the world will always be bigger than you think and that your parents aren’t always perfect. Jupiter Jet and the Forgotten Radio celebrates the confidence that comes on the precipice of adulthood and the hard lessons we learn when we don’t know everything - and introduces a brand new jetpack!

Perfect for readers of all age (nominated for “Best Kids Comic or Graphic Novel” in the Ringo Awards), and especially for those who love: Teen Titans, GO!, Lumberjanes, and Spider-Man: Into the Spider Verse.

Jupiter Jet first came to life in a diner over lunch one day. When readers started asking when volume 2 was happening Inman and Robinson knew they had to take her out of the diner and into the stars. (Don’t worry, we’ll still see diner owner, Clara, in Jupiter Jet and the Forgotten Radio!)

“A book about space lizards, asteroid belt chases, and fighting with your family, combines three things I love reading the most. Bringing some of my favorite things to one of my favorite characters I’ve created has been such a blast!” adds Robinson.

The plan is to produce a 120 page original graphic novel that will be released directly through Action Lab. Moving directly to an original graphic novel format has made the creative process smoother and challenged the creative team to keep up the breakneck speed of traditional 20 page comic book single issues. In Jupiter Jet readers got an incredible science fiction reveal in the final 5 pages of the story. Now, in Jupiter Jet and the Forgotten Radio, the first twist which turns the book on its head on page 20!

Kickstarter backers can pre-order the original graphic novel during an exclusive window before the books with a cover by Jonboy Meyers (Spawn), are sold to the general public and they come with an exclusive print by Nicola Scott (Earth 2), and b2rianls (painter Brian Lopez who Ashley also collaborated with on Aurora and the Eagle), which will not be sold anywhere else. There is also the opportunity for backers to purchase signed personalized copies of the book as well.

The Kickstarter launches Tuesday, January 21 and will conclude in 30 days. www.JupiterJetComic.com will take you directly to the campaign. 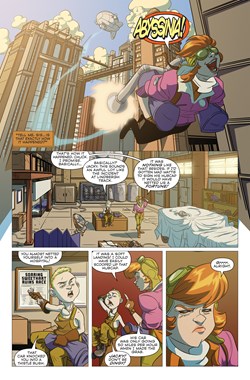 Jason Inman is a farm boy from Kansas, and since he now thrives in the superhero universe, it's no wonder why Jason Inman is often mistaken as the last son of Krypton. His comic book writing has been featured in projects published by DC Comics/IDW, Action Lab Comics, Alterna Comics, and Not Forgotten Comics. He just finished co-writing Jupiter Jet, a five issue mini-series published by Action Lab Entertainment. Plus, his podcast, Geek History Lesson, a weekly show that explores the secret histories of everyone's favorite pop culture characters, and various other weekly reaction and recap videos, can all be found on Jason's YouTube Channel, www.youtube.com/Jawiin which has over 13 million views.Â Â

Jason is a frequent guest on Collider Movie Talk and hosted DC ALL ACCESS, the show that brings you all the latest announcements from the world of DC, for 4 years. Also, Jason hosted special features for Warner Bros on the Batman v Superman and Suicide Squad Blu-rays.Â

Ashley Victoria Robinson is a Canadian hobbit now living in the United States. Her comic book writings have been published through DC Comics/IDW, Top Cow, Action Lab Comics, Not Forgotten Comics, and Colonial Comics. She is the host of the Geek History Lesson podcast (alongside Jason), any number of shows for the youtube channels including: Jawiin, Nerd Alert, Geek Bomb, Collider, Screen Junkies, DC All-Access, Comicbook.com, Geek & Sundry, Hyper RPG, Major Spoilers and many more. She is the co-creator of Jupiter Jet, Science! The Elements of Dark Energy, Aurora and the Eagle, and The Red Shirt Diaries and has been featured in several international commercial campaigns including Intel alongside The Big Bang Theory's Jim Parsons and is the current face of podcasting for Twitter Marketing. Follow her antics on Twitter & Instagram @AshleyVRobinson

Ben Matsuya is an illustrator and graphic storyteller. He earned his BFA in Illustration from Cal State Fullerton and was a finalist in the 2009 Walt Disney Imagineering Competition. He is known for an expressive, energetic style with an emphasis on empathy. Best known for his work on Action Lab's Jupiter Jet, he also published his own original horror graphic novel with Action Lab calledMidnight Massacre (2019). You can find all his work on MatsuyaCreative.com or follow him at @ben_matsuya on instagram and @matsuyacreative on twitter.

Elizabeth Kramer is a visual designer by day and artist by night. She debuted her comic colorist skills in Action Lab’s Going to the Chapel. Punchy yet soft saturated palettes are her specialty. She is a graduate from the Hartford Art School with a BFA in illustration and a minor in visual communication design. In her free time, she taught herself how to make and color comics. When not working the daily grind, she can be found toiling away on self-published work such as her webcomic Threader. Follow her on Twitter at @lizkreates or reach her by email at lizkreates@gmail.com.

You can find more of her work at: www.lizkreates.com.

Taylor Esposito is a comic book lettering professional and owner of Ghost Glyph Studios. A former staff letterer at DC and production artist at Marvel, he lettered titles such as Red Hood and The Outlaws, Elvira, Bettie Page, Interceptor: Reactor, Friendo, No One Left to Fight, Red Sonja and Vampirella meet Betty and Veronica, and Babyteeth.

Other publishers he has worked with include Line Webtoon (Caster, Backchannel) Dynamite (Battlestar Galactica, Black Terror, Army of Darkness/Bubba Ho-Tep), and IDW (Scarlett’s Strike Force). You can find his work at www.ghostglyphstudios.com.

If you're interested in interviewing Inman and/or Robinson about the project, please email jupiterjetcomic@gmail.com