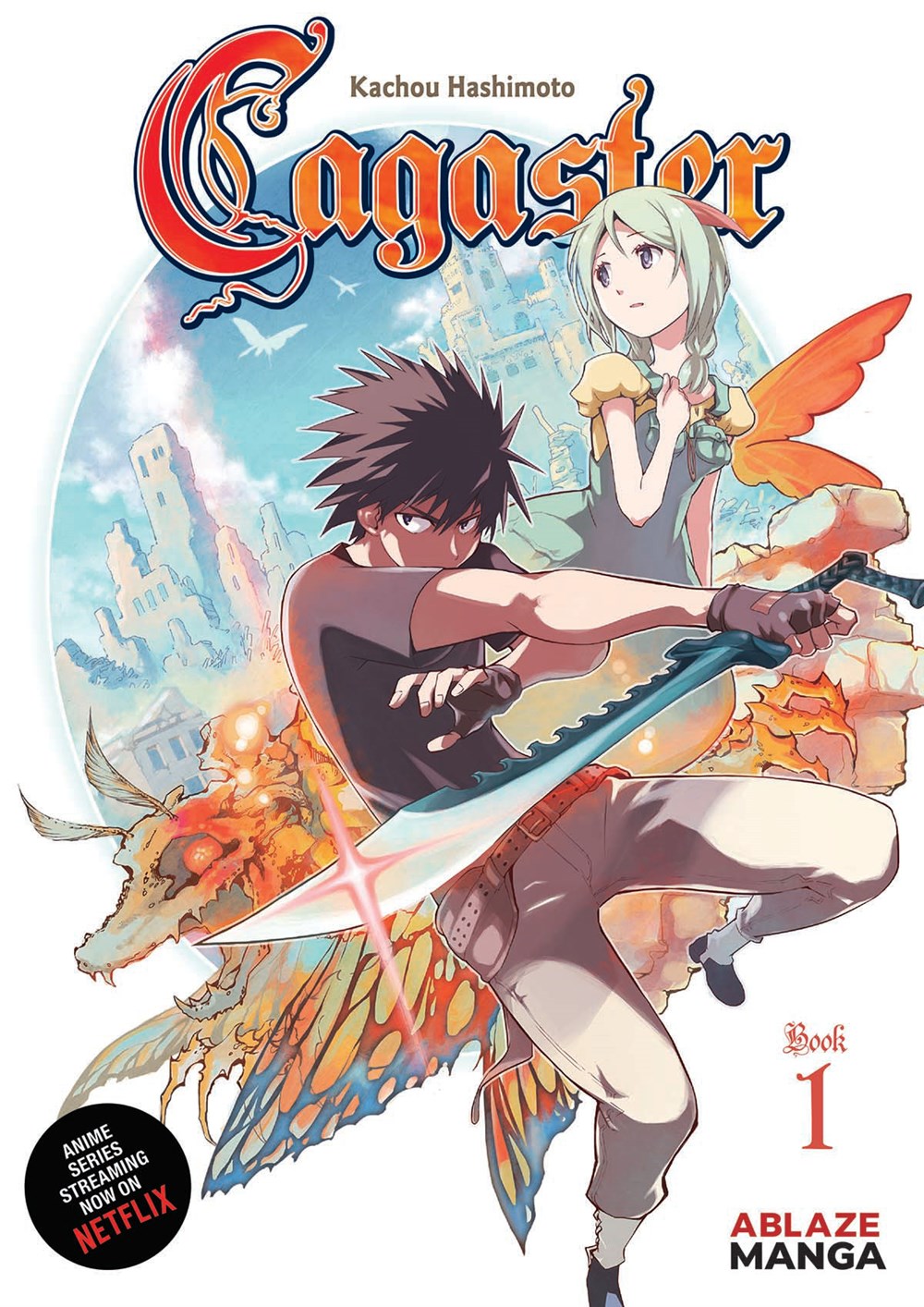 When I came across the premise for Kachou Hashimoto’s Cagaster I couldn’t be of two minds. On the one hand, a plague-ridden, dystopian world with outlandish characters is right up my reading interests and could present a chance to discuss plagues with students at the perfect moment. On the other hand, that “perfect moment” has colored everything in 2020 with a shade of grief and despair. Ultimately, it is because of that shade of grief that insisted writing about the book. If I’m feeling it, students are feeling it, and we should talk about it.

We enter the story 30 years after the emergence of a plague called Cagaster, which turns humans into huge, human-eating insects. While only one-in-a-thousand people are infected, the casualties rapidly decimate two-thirds of the human population. In the time since, a profession known as exterminators – those who hunt and eliminate these bugs – comes to exist and so we meet Kidow. In chapter one Kidow, while on a different job, finds and rescues Ilie, promising to reunite her with her missing mother and leading us to the rest of this first of six volumes.

Each chapter of volume 1 introduces us to more of the world of Cagaster, with a wide range of colorful characters and subplots – including a great deal of foreshadowing of what’s to come (pay close attention to the history that Nagy shares). This is decidedly a title for teens, as there are some moments of intense violence, including violent deaths. The very nature of the plague means some serious body horror of the Junji Ito variety (though not as detailed in its execution) and could make an interesting pairing for one of his books to discuss the horror genre in manga.

Readers who enjoy this first volume should consider watching the Netflix anime adaptation, which as of this writing has one season consisting of 12 episodes. While showing Netflix exclusive content in the classroom is difficult, another possible avenue for student work would be to compare and contrast the storytelling of the anime with that of the source manga. For now, I’m looking forward to picking up volume 2 so I can find out what is going on with THAT mysterious character!

Plot: 30 years into a devastating plague called Cagaster that transforms humans into monstrous, cannibalistic insects, young exterminator and mercenary Kidow rescues Ilie and vows to her dying father to find her mother. This first volume introduces us to trade city E-05, the cast of characters living there, and the harsh realities of a cagaster-infected world.

CCSS.ELA-LITERACY.RL.11-12.3 - Analyze the impact of the author’s choices regarding how to develop and relate elements of a story or drama (e.g., where a story is set, how the action is ordered, how the characters are introduced and developed).

Directions: Volume 1 of Cagaster focuses most of its pages on developing the dystopian world and its many characters’ lives in a world devastated by disease. While obviously a fantastical and dramatically different world than the one we find ourselves in with COVID-19, both worlds make decisions about what counts as “essential” to the continued functioning of society.

Pick three characters or settings from the manga and describe them in 2 or 3 sentences. Then, discuss in a full paragraph the relationship between that character or setting and the plague-ridden world they exist in, in terms of essentiality. For example, in our daily life during COVID-19, one setting deemed essential is the grocery store. Using that setting, you would describe what the store’s purpose is, how it looks, how common it is, who uses it, and so on. From there, you would discuss what about the setting makes it “essential” to continue operating during a pandemic and how the relationship between people and setting changes during this extraordinary circumstance. 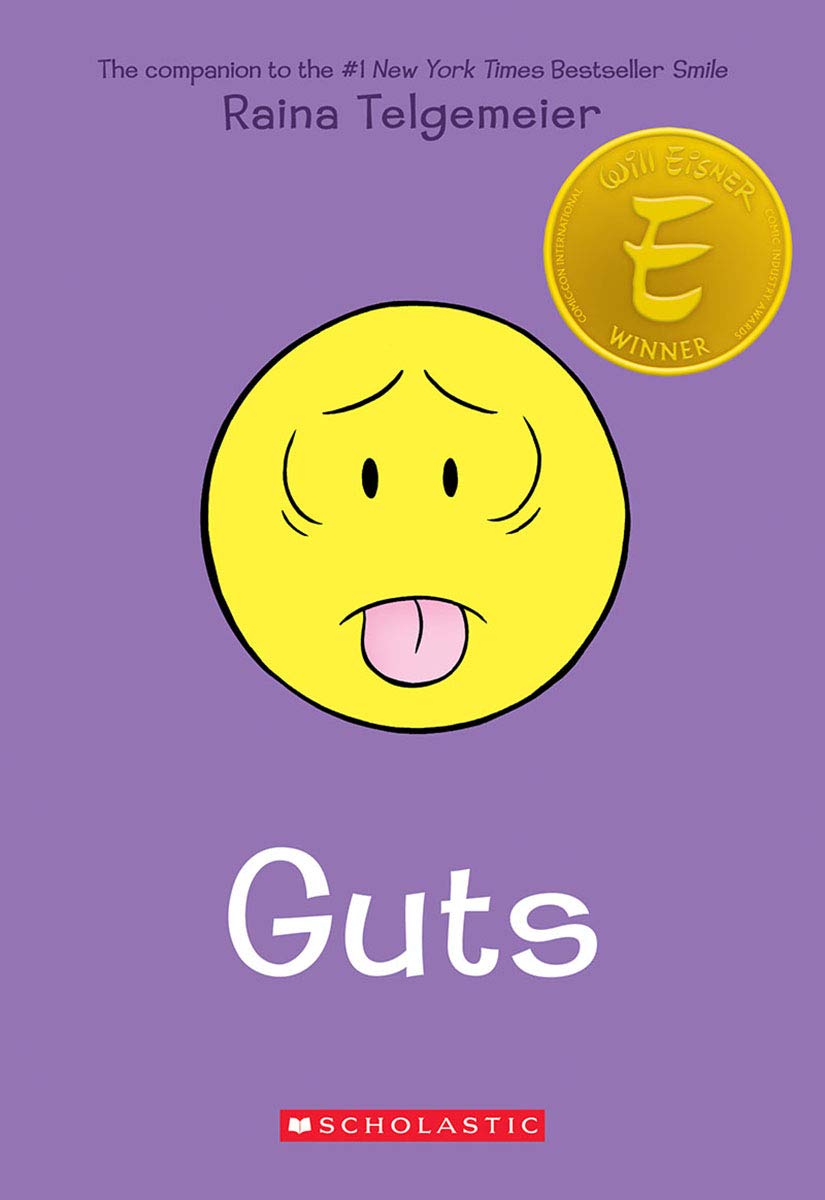 You’d be hard-pressed to find anyone interested in comics today who doesn’t know Raina Telgemeier. With multiple New York Times bestselling comics and a massive portion of total comics sales each year all to herself, it comes as no shock that her latest story, Guts, arrived with a 1 million copy first printing.

Guts continues Telgemeier’s autobiographic, health-related storytelling (such as with Smile) and delivers a fun, quick, and educational read. The humorous, gross-out illustrations start from the beginning as we see both Raina and her Mom sick with the stomach flu, courtesy of a younger brother of course. While this bout of illness is a source of great fun the next day, it soon becomes a source of anxiety for Raina, which continues as we enter fifth grade, changing friendships, and the inevitable changes that growing up brings (puberty, oh no!).

Exploring her anxiety and relationship to food, we see Raina experience new foods with her best friend Jane, learn that even those who are roughest might be going through something serious, and that there is no shame in going to therapy because “it’s no big deal.” I find myself returning repeatedly to the questions asked on page 69 – “Can you be sick even if you’re not sick? / Can you be health even if you hurt?” – because they speak so clearly to the everyday experience of chronic illness. Guts offers a positive, empowering example that we all need.

Plot: What begins as a simple bout of stomach flu spirals into a complex web of anxiety for Raina over using the bathroom, food, and adolescent life in general. As it becomes clear that Raina’s anxiety won’t be gone quickly, how will she learn to cope with it – and survive the trials of fifth grade at the same time?

Directions: On page 69 of Guts, Raina, as the narrator, poses the following questions in the bottom two panels: “Can you be sick even if you’re not sick” and “Can you be healthy even if you hurt?” These questions are central to the themes of the book, as Raina discovers what it means to have anxiety and how to accept and cope with it. Throughout the book, we are shown different visual representations of how this anxiety, stress, nausea feels to the characters.

Discuss these two questions briefly with the full class and evaluate an example of one of the visual representations (I recommend the bottom panel on page 20) together. After this, ask the students to work in groups of 3 or 4 to do the following:

1. Choose 3 or 4 (one per student) of the visual representations of anxiety or sickness from the text and describe the image. Consider having students redraw the image in their own style.

2. Choose another illness and draw 3 to 4 new images that visually represent how that illness feels. Be prepared to share these with the rest of the class and be able to describe why you chose these images.

3. Compare and contrast how different illnesses are visually represented. Does the visual representation change your reaction to the illness?

About the Author: Matthew Noe (he/his) is Lead Collection & Knowledge Management Librarian at Countway Library, Harvard Medical School, and a part-time instructor at the University of Kentucky. Matthew is a specialist in graphic medicine and advocate for the use of comics at all levels of education. He is currently President-Elect of ALA GNCRT, Treasurer of the Graphic Medicine International Collective, and a 2020 ALA Emerging Leader. You can often find him overcaffeinated, screaming about all manner of things on Twitter, or curled up with two dogs, a book, and not enough hands