Before BLOODSHOT Hits the Silver Screen, Experience the Hit Series from Valiant

Before BLOODSHOT hits the silver screen in 2020, experience the hit series that debuted Valiant's nanite-enhanced commando with this essential standalone volume!

Killed in action, soldier Ray Garrison is brought back from the dead by Project Rising Spirit, a private military contractor trafficking in violence. Infused with cutting-edge nanotechnology, Bloodshot’s nanites make him a nearly unstoppable killing machine. His enhanced strength, speed, endurance, and healing make him the perfect weapon, and he serves his masters at PRS very well. But after defying his programming and escaping his captors, Bloodshot will fight to rediscover the secret of his true identity and expose the billion dollar black-bag operation that created him once and for all. 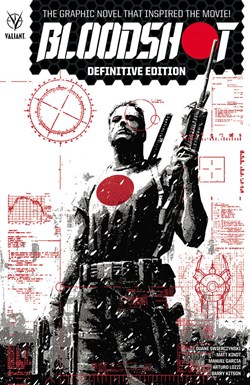 You have well-established credentials as both a novelist and comics writer. What made Bloodshot - and by extension, the Valiant Universe - a project that you gravitated toward?

DS: It all started, as these things tend to do, with a beer.

Okay, maybe it started a few weeks before the beer, but I remember the beer the most, because it was over a few beers at San Diego Comic Con that editor Warren Simons and I really started to dig around Bloodshot’s history to see what made him tick. I’d written a few titles for Warren during his time at Marvel – he was the editor who brought me aboard, in fact — and I was excited by the idea of working with him again. But once we really started talking about who Bloodshot is, and was, and what he might want now... well, my brain just went into overdrive. He’s my favorite kind of noir hero: tortured, yet determined to do the right thing, no matter what kind of horrible things he may (or may not) have done in the past. I’ll admit that I missed the original series back in the day, but once I caught up and saw the creative possibilities, Warren would’ve had to put a bullet in my head to get me to back off.

By his very nature, Bloodshot is an amorphous character, someone who – at least at first – lacks a distinct personality. How do you get inside the head of a man who doesn’t even know who he is?

DS: See, that’s the best time to jump into someone’s head — when he’s trying to figure it all out, too. Both the reader and the hero are starting at the beginning. I love amnesia stories, unreliable narrator stories, missing time stories, paranoia stories... so it’s been great fun to blend all of these flavors in a balls-out, stomp-the-accelerator action-adventure saga. Bloodshot is like a blend of The Bourne Identity and Robocop with plenty of Memento and Commando in there, too.

In his original incarnation, Bloodshot had an array of abilities - rapid healing, enhanced strength, and communication with machines. Have you toyed with his power set at all and perhaps added something new to his arsenal?

DS: Oh yeah. You’ll see a new trick or two in the first issue. Nanomachine technology has come a lonnnnng way in the 20 years since Bloodshot first appeared... Also: Bloodshot can still communicate with machines. But he’s stuck with a dial-up connection. (Kidding! Maybe.)

Although he’s ostensibly a super-hero, Bloodshot also bumps up a lot against a lot of other genres - science fiction, war and mystery just to name a few. What is your perspective on the unique space that Bloodshot occupies in the Valiant Universe?

DS: I have the most fun with stories that mash together genres like a monster truck rally. As for the Bloodshot’s place in the Valiant Universe, I’d say that if you like surprises, violence, noir and crazy science that might make your brain hurt... then this is your comic.

From the get-go, readers will see that Bloodshot’s keepers in Project Rising Spirit have less than noble intentions. Will they be the series’ primary antagonists? And will we see their machinations spill over into the Valiant Universe at large?

DS: Well, that’s the funny thing about villains. They never think they’re the bad guys, do they? Project Rising Spirit is the tip of the spear – the U.S. government’s secret weapon they bring out when circumstances are dire enough. Sometimes their missions are noble, and for the good of the country. Sometimes... eh, not so much. Just like in real life. But rest assured: PRS is very much plugged into the rest of the Valiant Universe. I can’t say anything else right now without ruining some of the surprises we have in the very first issue...

Technology and its impact on modern warfare is obviously a running thread throughout this series. What developments in the real world have influenced your take on Bloodshot?

DS: P.W. Singer’s Wired for War was a big touch point for me — I’m happy Warren turned me on to this book, which is all about the thrilling and scary world of robotic warfare. It’s more than strange to grow up watching movies like Terminator and Robocop and start to see reality edge closer and closer to these allegedly science-fictional worlds. I was also inspired by a news story this past December, when the Iranian government claimed to have shot down a next-generation experimental U.S. drone and proudly displayed photos of it. I thought to myself, what if it wasn’t just a drone? What if they shot down something even more super-secret?

Bloodshot is not just a gun-for-hire or an armed vigilante. What is his ultimate mission and where will it take him as a character?

DS: Well, I’d hate to say something horribly pretentious like, “This is one’s man violent and dangerous quest for his own identity...” But the thing is, that’s exactly it. Bloodshot has no frickin’ idea who he is. He has many, many (many) memories in his head – memories of being a guy named Angelo Mortalli, as well as a guy named Ray Garrison... but who is he beneath all of that? Is he just a living weapon who’s been running so hot that it burned away most of his soul?

Does a guy like that have a chance for redemption, even if he does find the answers he’s seeking?

Also: it will end, as these things tend to do, with Bloodshot having a beer.