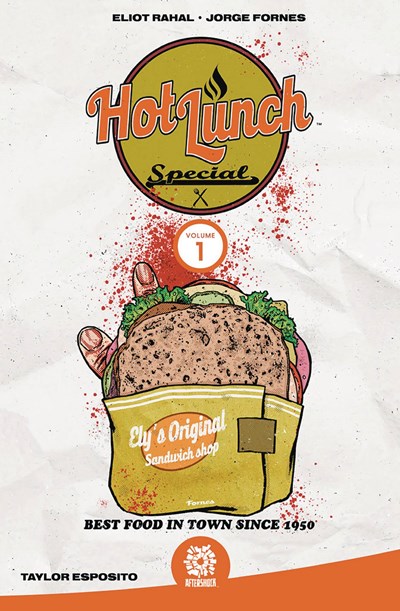 From Eliot Rahal, the writer of Cult Classic, The Paybacks and Quantum & Woody comes HOT LUNCH SPECIAL, with art by Jorge Fornes (Amazing X-Men, Wolverine, Magnus)! A midwestern noir series set in the harsh landscape of the northern Minnesota Iron Range—Hot Lunch Special is all about family, food and the fight for survival.

The Khourys are a classic immigrant success story: A fractious and quarrelsome Lebanese family who carved their slice of the American Dream by becoming the largest distributors of vending machine sandwiches in the upper northern Midwest.

Unfortunately, the Khourys gains have been ill-gotten and a branch of the Chicago Irish Mob has come back to collect a past debt. Fealty is demanded, shots are fired, and long-hidden family secrets are fully revealed. Now, Dorothy Khoury, the daughter of the family patriarch is forced to unite her splintered bloodline and fight back.

Only one question is worth asking...is blood thicker than sandwiches?

ELIOT RAHAL ON THE PREMISE OF HOT LUNCH SPECIAL AND WHY SHOULD READERS BE EXCITED FOR IT:

HOT LUNCH SPECIAL is, in its simplest terms, a story about a small-town family with big dreams that gets a little too big for their shoes. They take on more than they can chew, and end up getting into a bloody and merciless war with one of the most feared Irish crime syndicates in America.

Here's the sort of elevator pitch:

"The Khourys are sandwich Kings of Minnesota. These All-American Arabs are a delicatessen dynasty stretching back over eighty years that rules over the entire upper northern midwest. And now… they’re under siege. An ancient contract has been broken and the Irish Mob has come to collect a debt. War has been declared. And Dorothy Khoury isn’t so sure that her father, the family patriarch -- Jordan Khoury Senior -- is capable of doing what it takes to claim victory. It’s parent against child, brother against sister. The frayed family must unite in order to survive, but one question casts doubt: “Is blood thicker than sandwiches?”

But the book is also so-so much more than that. This is a story I've been trying to tell for a very long time, and to be perfectly honest I'm really nervous. The characters, who have been so beautifully brought to life by Jorge Fornes, are inspired by the kinds of people I grew up around. The people I was raised by--my family It's incredibly personal. But because of that, I think people are going to be able to really connect to it. Many millennials, such as myself, have a complicated relationship with their parents and siblings. Most can relate. No one can piss you off more than your loved ones. So I'm trying to bring as much of that into this story. HOT LUNCH SPECIAL is about the people that define us, and how we find our individual identities despite them. This story is all of the crazy stories that grandparents pass down to their children. It's about our best and worst birthdays. It's about the pain. The joy. And the love.

Oh, and also. Listen. All those words and feelings are cool and whatever. But seriously.... You just need to buy this book because of Jorge. I mean. Every page is just so dang pretty to look at. And that Robert Hack variants? Get the fuck out of town! So good.

ELIOT RAHAL ON HOW HIS EXPERIENCE HAS BEEN WORKING WITH AFTERSHOCK COMICS SO FAR AND SOME OF HIS FAVORITE TITLES OF THEIRS:

It's been thrilling. Truly. AfterShock is a well-oiled machine and I honestly feel like I'm a roller coaster ride. Like. Wow. Seriously. And working with Mike Marts as my editor. I mean... guy knows what he's doing. He expects my best. And I like that. It's been amazing working with him.

What am I reading? A few books actually. Cold War, Animosity, Her Infernal Descent, loved Eleanor and the Egret. Oh, not sure if you've heard of this one... I think it's called, Babyteeth. Pretty cool. I've been following and reading AfterShock since they started. A lot of creators that I admire have been telling great stories there. It's incredibly humbling to be amongst them.