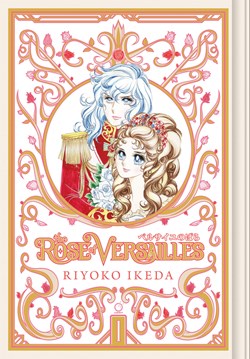 One of the most beautiful and historically articulate stories to come out over the holidays is UDON Entertainment’s new English translation of Riyoko Ikeda’s The Rose of Versailles (2019).

An extremely popular shojo manga, Ikeda’s The Rose of Versailles was initially serialized in Weekly Margaret in 1972. UDON Entertainment has now published the first English language translation of the story, containing its first twenty-two chapters. Since the 1970s, the original telling of The Rose of Versailles by Ikeda’s has been adapted for the stage, anime, and feature films.

The Rose of Versailles opens with the birth of three significant children who will one day meet up and influence each others’ lives during the reign of King Louis XVI at the court of Versailles.

Hans Axel Von Fersen is born in Scandanavias the very handsome and eldest son of a wealthy parliamentarian. Oscar Francois de Jarjeyes is the sixth daughter born to the Commander of France’s Royal troops in 1755; after having five daughters and hoping for years to have a son to inherit his royal role, Oscar’s father decides to raise her as a boy-soldier who will indeed inherit his legacy as Commander of France’s Royal troops. Finally, and most notably, the story also introduces readers to the birth of Marie Antionette on November 2, 1755 and her future role at the court of Versailles.

Once grown, all three characters meet up at King Louis XVI’s court of Versailles. Oscar is the commander of Marie Antionette’s French Palace Guards and works closely with her servant Andre. Both Oscar and Andre observe and protect the French Royal Court during the latter half of the 1800s and the escalating possibilities of a French Revolution in response to the King’s court of Versailles’ splendors.

Plot: Born female, Oscar Francoise de Jarjeyes is raised as a son by her father. After having five daughters, Oscar’s father wished for his sixth child to be a son. A son could inherit his title as Commander of the French Royal troops. When he discovers he and his wife have another daughter, however, he moves forward with his plan despite the fact that Oscar is a girl. Once grown, Oscar has the unique opportunity to witness King Louis XVI’s court at Versailles.

Since the story begins by highlighting their births and foreshadowing the three main characters’ future roles in King Louis XVI’s court of Versailles, students should take notes on each character individually. These notes will include not only the characters’ introductions (both as babies and as members of the court of Versailles), but also the settings, events, and final resolution they each experience.

The following note-chart helps students focus on these key elements of story per character.