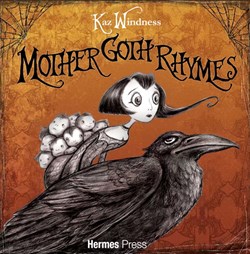 Mother Goth Rhymes is an absolutely brilliant and thrilling new early reader picture book. The premise centers on Windness’ desire to revisit and retell some of our favorite and legendary childhood stories: nursery rhymes, fairy tales, poems, fables, and so much more. Witty poems and fascinating illustrations are on every page.

And I’ll be honest: I am not a big fan of poetry. Until now. Windness has created her own genre of poetry, a pleasing teeter totter that examines contemporary poetic writing alongside eloquent and witty twenty-first century illustrations.

While reading, I thought to myself: “This is like having Tim Burton, Neil Gaiman, and Shel Silverstein in the same room writing and illustrating poetry!” To top that off, Windness dedicates the book to “creepy children everywhere.” Win! Families, educators, and students can all enter this literary playground.

With my first crush for poetry in mind, I give Mother Goth Rhymes two thumbs up. If I had more thumbs they would all be up. In fact, I can totally imagine myself asking Windness if I could commission a poem and illustration that depicts a gothic joker-like-figure with ten thumbs up in the air. If you want to know why that visual popped into my mind pick up a copy of Mother Goth Rhymes.

Integration of Knowledge and Ideas:

Analyze how visual and multimedia elements contribute to the meaning, tone, or beauty of a text (e.g., graphic novel, multimedia presentation of fiction, folktale, myth, poem).

Because Mother Goth Rhymes is based on contemporary retellings of some of our favorite childhood stories, the first lesson to teach should focus on multimodal literary allusions.

To start, read students a few of the poems out loud and make sure they see the illustrations. Then, pair the poems you choose with some of their ancestral literary roots. Ask students to discuss how the original tellings and the retellings are similar and/or different.

Research to identify 3 links to other stories, read original, read Mother Goth’s poem again. Write similarities and differences, and what you enjoyed most from Mother Goth are any of her literary allusions.

Dr. Katie Monnin is the author of eight books about teaching pop culture, comic books, and graphic novels in 21st century classrooms. Since 2010 she has written two monthly reviews and two corresponding lesson plans for her Diamond Bookshelf column: "Katie's Korner: Graphic Novel Reviews for Schools & Libraries." In 2018, Dr. Monnin founded "Why so serious? Productions," a consulting business that creates pedagogical materials for 21st century teachers, librarians, and publishers who want to teach pop culture. She served on the San Diego Comic Con jury in 2013, and she frequently travels the nation and the world to discuss teaching with pop culture in 21st century classrooms.
Tweet