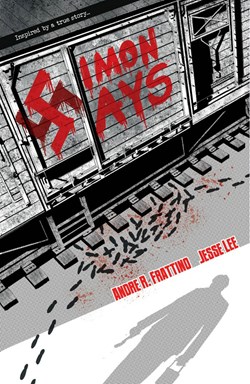 “The only way to get close is to look weak.”

Based on the true story of Holocaust survivor Simon Wiesenthal, who literally lost everything to the Nazis, Simon Says is a riveting tale about how an every day man became a Nazi propaganda artist and then a Nazi hunter.

Right in front of his yes, Wiesenthal’s family was killed by a Nazi soldier he would neither forgive nor forget. At that very moment, Simon Wiesenthal became an under cover Nazi hunter. In order to stay alive, however, Wiesenthal agreed to paint swastikas on trains for the Nazis.  And then he waited.

When World War II was over for everyone else, Wiesenthal learned that he and his wife had lost over eighty members of their family. The war was not over for Wiesenthal. Wiesenthal had a great memory and a keen eye for portrait painting. He had seen enough. He knew enough.

Feeling as though the top ranking Nazi Officers had escaped without facing the consequences of their actions at the end of the war, Wiesenthal teamed up with American officers to run an under cover investigation into where these high-ranking Nazis were hiding. For instance, he was a part of the mission to find and apprehend Adolf Eichmann (the major voice and author of Hitler’s “Final Solution to the Jew Question”) and “The Angel of Death,” Joseph Mengele (the man who conducted horrifying experiments on the Jewish people).

With his old and loyal friend Bruno at his side, Wiesenthal’s plans to hunt high-ranking Nazi officers was more than just a new profession he inherited as a result of the war.  It was personal. Very personal.

Plot: Simon Wiesenthal lost over eighty members of his family during the Holocaust. At the end of the war he became a Nazi hunter, searching for the most high ranking and unforgettable faces he had seen during World War II.

Engage and orient the reader by establishing a context and point of view and introducing a narrator and/or characters; organize an event sequence that unfolds naturally and logically.

In the first few days (or up to a week) before reading Simon Says talk to and prepare students for each of the following categories that play a significant role in the graphic novel. This information will help students better understand and comprehend Simon Wiesenthal’s point of view and contextual decisions during the story:

Per day, assign the page numbers for homework that best suit your students, and on each of the following days ask students to review where they placed their Post-It Notes. in small groups of 3 - 4. Next, ask each student group to share five of their most significant Post-It Notes placements, allowing other groups to take notes if needed. Engage in small group and large group discussions until done reading.