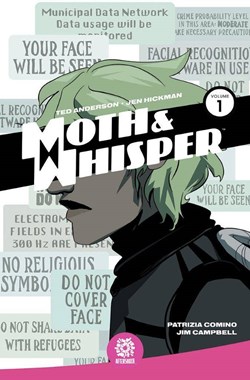 With the skills of both parents, and an intellectually charged ambition to do right, Niki is perhaps more powerful than the crime bosses they encounter and their two very famous parents.

Set in a cyberpunk future that paints a picture of how far social media can be used for corruption, I strongly recommend Moth & Whisper to parents, teachers, and librarians. A surprise title find for me, but a growing title in the graphic novel industry, I look forward to picking up the next volume as soon as it comes out!

Plot: The Moth and the Whisper are legendary thieves and everyone knows their names. When they go missing, however, their gender-queer teenager (Niki) finds a secret video and steps up to follow the clues. Will a young Niki be able to follow in their parents’ footsteps and find their parents?

Reading Moth & Whisper: The Kid Volume 1 centers on putting textual and visual evidence together in an ongoing investigation to find Niki’s parents.

Ask students to create an outline for each of the five chapters. Underneath each chapter’s space, students need to leave room for citing three textual and three visual clues from each chapter, thus creating a document trail of the clues that they think best help Niki throughout the story. The goal is for students to identify the evidence, both textually and visually, at the same times Niki does, almost as if they are co-investigators in the story.

After completion, and in order of the chapters, engage in a whole class discussion that allows all students to share their textual and visual evidence clues from each chapter in the story.