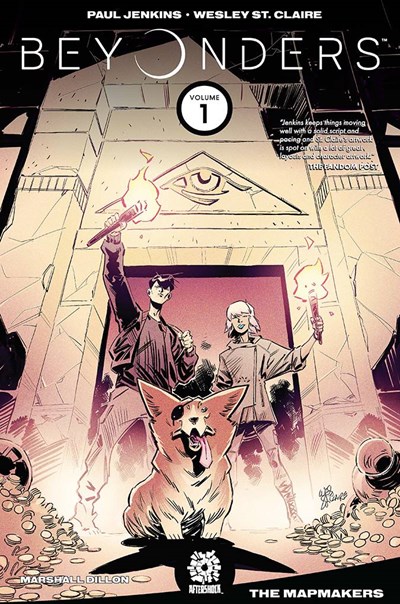 Jacob Tate’s aunt and uncle love sandwiches. Despite asking Jacob what sandwich he wants to eat, they really don’t seem to know their nephew very well. Probably because they’re always watching TV and eating sandwiches. But for a teenage boy obsessed with historical conspiracy theories, cryptography, and crop circles that’s probably for the best. Jacob has a lot of alone time. The only one who seems to know what Jacob is doing is his principal, and he’s not very impressed with Jacob’s extra curricular hobbies. In fact, he pointedly advises Jacob to think more about his life after graduation, which is coming up soon.

With his principal’s advice looming in the back of his mind, however, Jacob doesn’t have much time to think or to react. At home, he finds his aunt and uncle watching TV, and his aunt’s face has melted off. Both his aunt and uncle are robots, but why? With helicopters hovering over his house, and troops being sent in to retrieve him, Jacob must decide how to save himself and his one-eyed, flatulent dog named Shadwell.

Then, Narine opens the closet in which Jacob is hiding with his talking dog: “Jacob Tate, my name is Narine and I’m with a covert group of freedom fighters known as the Beyonders. Come with me if you want to live.” Narine explains who the Beyonders are and why they seek to stop The Order from controlling all ancient knowledge and wisdom. Apparently, Jacob is right on the money with all of his historical conspiracy theories and crop circle knowledge. That’s why the freedom fighting Beyonders need Jacob. He’s the expert on how they can figure out the story behind George Mallory’s death on Mount Everest, and how to use the companion volume George carried up the mountain to decode messages from the Ancient World.

But The Order, a group whose goal for centuries has been to maintain these secrets and the power structure that has kept most of society subservient, is following closely behind, very closely. As a result, the Beyonders send Narine and Jacob out on an adventure to decode these ancient messages and figure out their historical origins.

Plot: Jacob Tate is about to graduate from high school and his principal is concerned. What will Jake do after being rejected from his top college choices? Uncle Paul and Aunt Karen seem oblivious and obsessed with sandwiches. Shadwell, his dog, seems to know Jake better than anyone else. In fact, Shadwell has been looking out over Jake until the Beyonders enter his life. Who are the Beyonders, and why do they want Jacob? The Beyonders believe Jacob is special and able to solve the same conspiracy theory they also seek to solve.

There are two steps in this lesson plan. The first step calls on students to cite strong and ongoing evidence on a timeline in order to track Jacob and Narine’s adventures and findings throughout the first volume in the series.

First, in order to document all of the adventures and findings, each student needs a single piece of poster board. On that poster board students need to create a timeline that reflects each of Jacob and/or Jacob and Narine’s adventures and findings. Be sure to tell students to guide their timeline by outlining space for 5 chapters worth of clues and adventures. Students can choose to keep textual or visual notes with page numbers to document each clue and adventure they see as key to the development of the story.

This timeline can serve as a stepping stone to the next volume in the series as well.

The second step involves students rereading the story again and identifying what Jenkins claims is “an actual treasure hunt, inspired by my lifelong love of secret codes and mysteries. Each issue will contain clues which, when assembled, will lead lucky readers to an awesome revelation.” Each panel in the story has a symbol or a code that students can jot down. After students are done identifying the codes and symbols and deciphering them, they can go the AfterShock website to find out if they are right. (aftershockcomics.com).