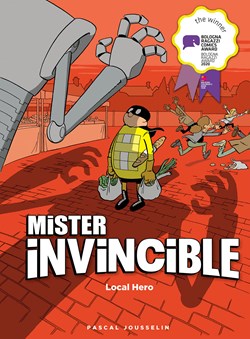 MiSTER iNViNCiBLE is indeed a one of a kind, true superhero. Whether he is chasing down a thief, outsmarting a mad scientist, or fighting the evil Jester, MiSTER iNViCiBLE’s greatest superpowers are his words and forethought.

Twenty-first century librarians and educators are pretty well aware of the popularity of comic books and graphic novels to enhance reading comprehension. Embraced more and more each year by schools and libraries around the world, reading comic books and graphic novels are proving that they actually provide a more diverse reading experience that activates two types of intelligences: visual-spatial and verbal-linguistic (Gardner, 1983).

Before reading, ask students to share what they know about comic books and graphic novels and how to read them. Record and discuss student responses.

Next, introduce students to either a selection or the entire collection of Jousselin’s MisTER iNViNCiBLE. Walk the class through the first MiSTER iNViNCiBLE comic book story of choice, and ask them to discuss what is similar and/or different to what the class recorded and discussed before reading. Update the record of student responses to include their new thoughts on similarities and / or differences in the storytelling.

Students should then be encouraged to read a few MiSTER iNViNCiBLE comic book story selections on their own and take notes on how the stories were told, again noting both similarities and / or differences. 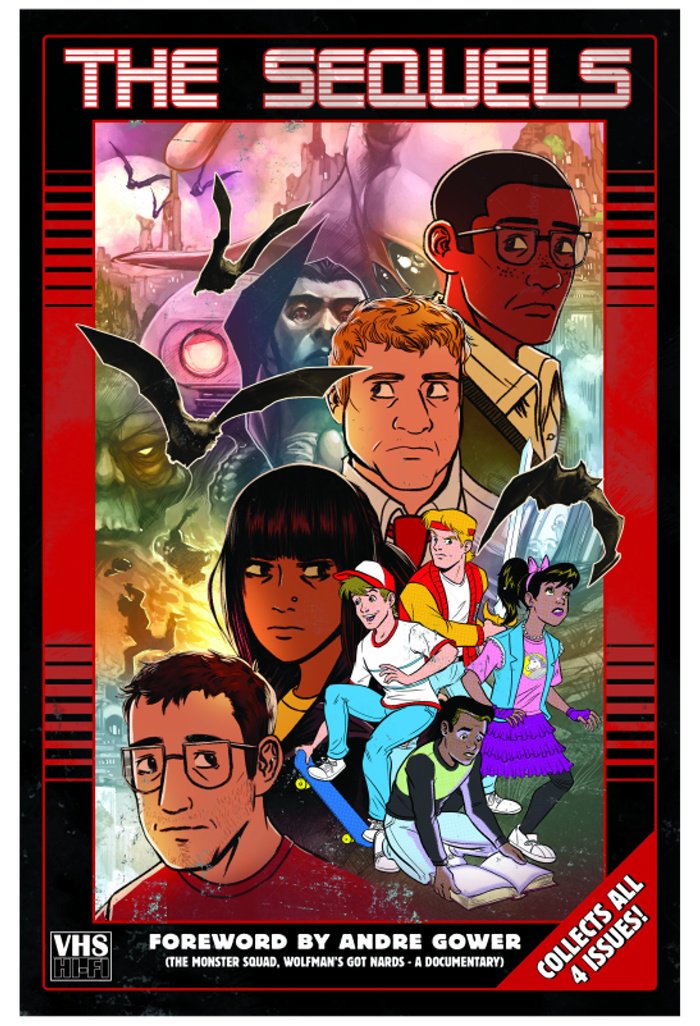 “Decades ago, we all touched something bigger than ourselves and then had it yanked away.

a sequel an in-real-life sequel.”

Fanbase Press’ The Sequels is a tour de force of time and travel for Gwen, Dakota, Avery, and Russell. As children in the 1980s, each of them experienced a unique and tremendous adventure that seems unbelievable.

Many years later, as adults, each of the four main characters are invited to meet up at what seems to be “A group of other peopler who’ve had adventures. And they wrestle with the end of those adventures, just as you wrestle with the end of yours.” While Avery accidentally hit a baseball over the fence of a top-secret military facility and found a robot named Ollie, Russ met up with a bunch of monsters in his high school gymnasium on Halloween night. Russ even claims to have defeated Dracula! Gwen’s adventure marks the first time a human made contact with alien life. And Dakota? Well, he saved imagination after being transported by a book to a magical world.

While each character explains his or her adventure, it becomes pretty obvious that they each have one thing in common; none of the characters experienced a sense of closure during their adventures. Each of them wrestles with how their childhood adventures ended, or, it seems to some, didn’t end at all.

As they learn about each other’s childhood adventures, the four adults wish to rekindle what might have been, sequels that might help each of them find the closure they so desperately sought as children.

Plot: In the 1980s, four children experienced life-changing adventures. Years later, as adults, the four end up in a support group suggested to them by a mysterious man. As they begin to share their stories they begin to suspect that their adventures might be related, and that all four of them feel little closure from their earlier adventures.

*  The number(s) referenced above corresponds to the number used by the Common Core Standards (www.corestandards.com

After reading, ask students to form into four groups. Once students are in their groups, assign them one of the four main characters in The Sequels.

Offer student groups some time to review their assigned characters’ unique childhood adventure and their adult role in finding closure to the united stories. Once students have reviewed their characters’ unique role in The Sequels, give them at least 2 - 3 class periods to work in their groups to prepare a multimedia (both textual and visual) presentation that hyper focuses on their character’s unique role in the story, offering clarifying information, strengthening their character’s claims and evidence. Student presentations can be informational or a creative reenactment.