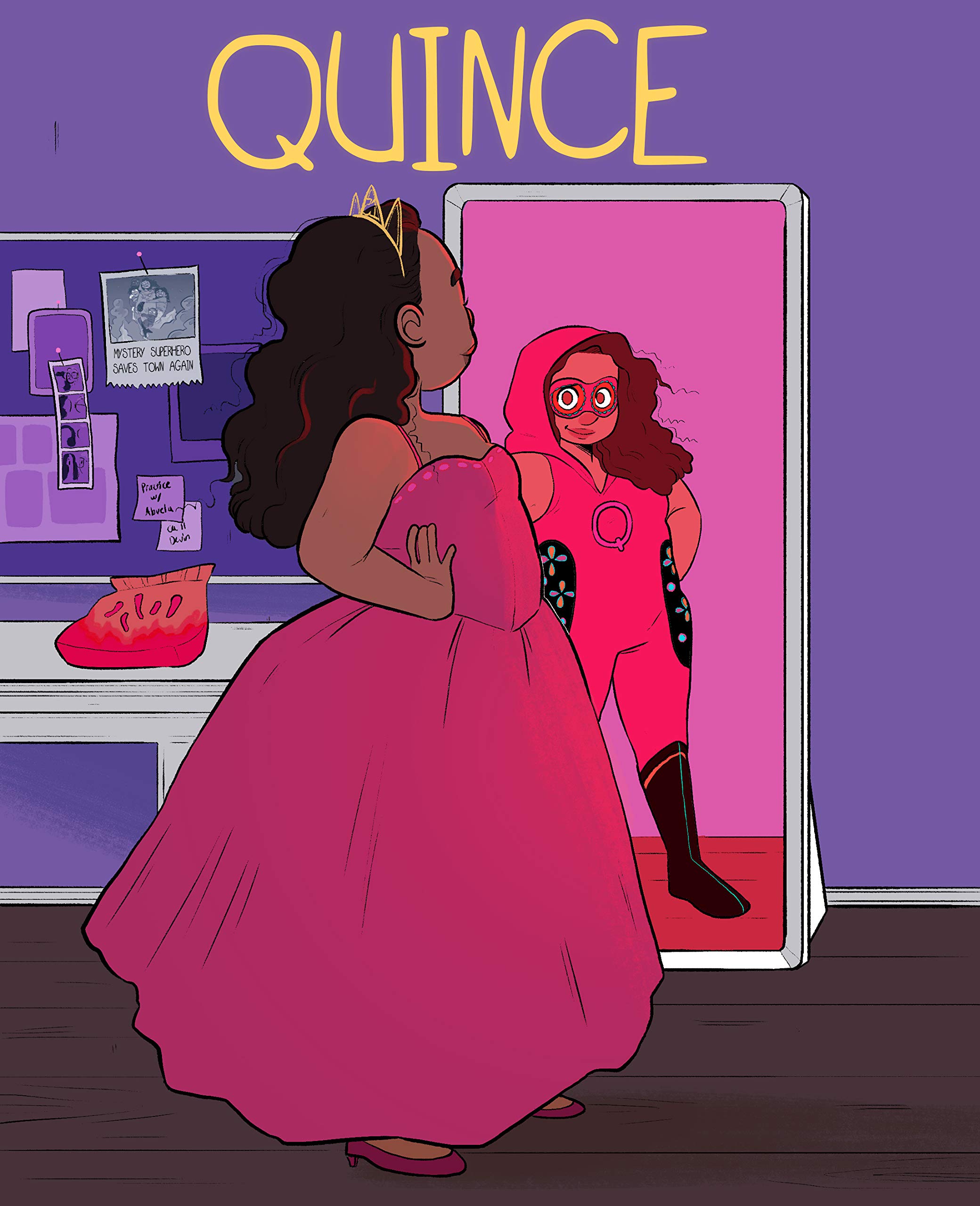 “You must remember, Lupita, with a great quince dress comes great responsibility.”

For teachers and librarians, the most important detail about Quince: The Definitive Bilingual Edition is that it presents the story both in English and in Spanish. Whether teaching Spanish-speaking students to read in English, or English-speaking students to read in Spanish, this blended lingual publication offers educators, librarians, and students a high-quality graphic novel story in two languages. The publication also contains a complete history of the story and an extensive, thoughtful study guide for both teachers and librarians.

Lupe is thrilled about her upcoming quinceanera! Her grandmother Emma has made her the perfect quince dress, and Lupe feels “like the President of the United States, plus the Queen of England, plus, like, God” (9).

Along with the upcoming excitement about her quinceanera, Lupe shares that she is also a self-admitted fangirl of superhero shows; Lupe’s concern about superhero shows, however, is that most of the superheroes are white people.

As Lupe’s big day approaches, Lupe accidentally experiences her first superhero power by thinking so intensely she blows up the family bathroom. Next, Lupe learns she can fly. As a result of Lupe’s emerging powers and her close relationship with her grandma, Grandma Emma begins to share what now seems like a family tradition. On the day of Grandma Emma’s quinceanara in 1960 Mexico City, she became able to freeze time! Grandma Emma takes these familial superhero powers seriously and tells Lupe: “But I would advise you to use your powers-and wisely- while you still have them” (32). Grandma Emma believes Lupe needs some training in order to use her powers wisely. The first lesson: Flying.

Lupe and Grandma Emma spend the summer training for mastery of Lupe’s emerging superhero skills. When school starts in the fall, Lupe spends a few weeks wondering when, and if, she will ever need to actually use her superpowers. Then, one day, a school friend Lupe and her friends call “Hot Devin” slips off a ladder. Now hanging from the rooftop of the school gymnasium Lupe recognizes her opportunity and rushes to save “Hot Devin.”  With her powers secured and tested, Grandma Emma keeps a police scanner on all day and Lupe is sent out to help save people in their community day and night. Lupe feels like: “I was always hungry or tired or usually both at the same time, but I was defending the peace, which was cool, and I was also blowing up on social.”

But how can Lupe continue to save the day as she becomes more and more famous in the community? “Hot Devin” follows and crushes on the unknown superhero nicknamed “#Q”, but Lupe must follow the hero’s code and not reveal her identity.

Even more importantly, and after Homecoming, will Lupe be able to deal with a new superpower high school student?

Plot: Lupe is excited about her quinceanera party with family and friends. But with her quinceanera comes some unexpected news. Lupe has superhero powers, and her grandmother shares that she too experienced superhero skills on her quinceanera. Will Lupe live up to her grandmother’s ideals for a family superhero while still maintaining her normal high school routine? Will she be able to protect herself, her school, and her friends when another superpower student starts to attack the school?

Determine a theme or central idea of a text and analyze in detail its development over the course of the text, including how it emerges and is shaped and refined by specific details; provide an objective summary of the text.

Students can begin their reading process by choosing the language they feel most confident reading. Next, ask students to choose one of the following themes and write it on the top, and in the middle of the below T-Chart graphic organizer: Tradition and Celebration, Culture, Fandom, Body Shaming, Heroes and Antiheroes, Friendship. 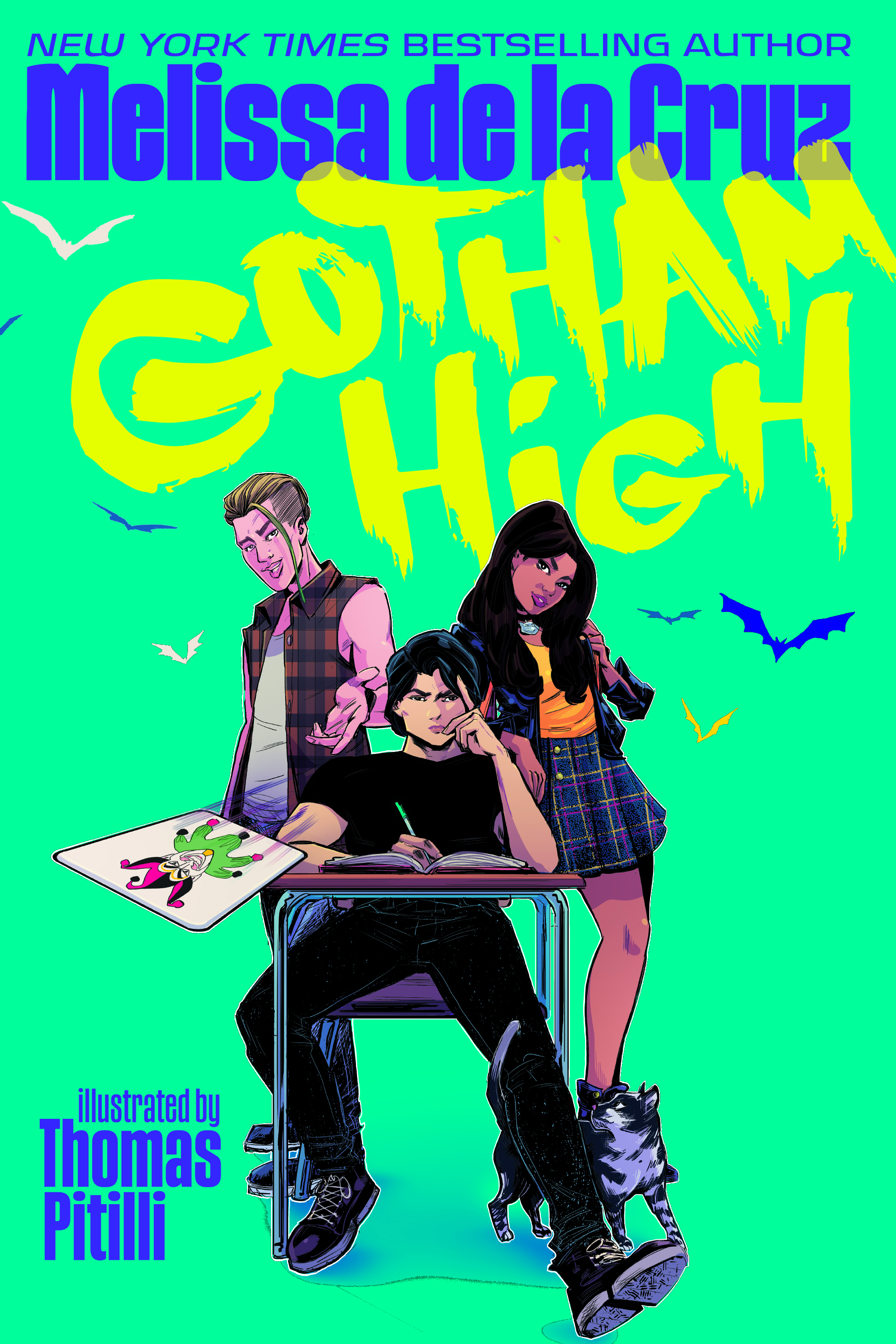 Expelled from his elite, all boys prep school, a teenage Bruce Wayne returns to his local Gotham High. Haunted by grief and guilt over his parent’s death, Bruce has been angry and getting into fights. His famed butler, Alfred Pennyworth, is also grieving; Bruce’s mother Grace was also Alfred’s sister.

At Gotham High Bruce is reunited Selina Garcia Kyle, his childhood sweetheart. Now the primary caregiver for her father due to his early-onset Alzheimer’s, Selina is also grieving the loss of her mother from a fatal car accident. Teaming up with Bruce once again, Selina invites Bruce back into her life. She introduces him to her best friend, Jack Napier, poker games and bowery parties.

Back at Gotham High, a random case of mistaken identity leaves Bruce unconscious and Harvey Dent mysteriously kidnapped. Even though he is now in the hospital, Bruce is determined to start solving this case right away. Slipping out of the hospital, Bruce ends up in Chinatown. There, he meets a young apothecary clerk named Ivy. Ivy helps Bruce identify the illegal drugs found in Bruce’s blood after the incident.

After he meets with Principal Gordon and learns there is no video footage of the incident, Bruce also finds a random strand of hair at the school’s security guard’s desk. Bruce begins to feel as though Harvey’s kidnapping may be linked to the poker games where Jack and his friends cheat rich students out of their money. After he gets an invitation to the next party, Bruce arrives only to spend a lot of time flirting with Selina throughout the night. As he drops Selina off at the end of the night, Bruce makes sure they almost kiss. Just missing the kiss, however, Bruce actually uses this moment to collect a strand of Selina’s hair.

Bruce identifies the new strand of hair as matching that of the strand of hair found on Gotham High’s security guard’s desk. Both hairs are Selina’s! Is this a coincidence or a new piece of evidence in the mystery surrounding Gotham High and its student body’s poker obsession?

Meanwhile, Harvey Dent returns to school and directs his anger at Bruce. Frustrated by Harvey’s anger and still wanting to solve the mysterious drugging and kidnapping, Bruce’s inner-investigator becomes set on hosting the biggest party of the year. At his party, Bruce finds out that this mystery is much more complicated and mysterious.

Plot: Bruce Wayne has been kicked out of his all boys prep school and returns to Gotham High. Befriending his childhood sweetheart Selina Garcia Kyle, Selina introduces Bruce to Gotham High life and to her best friend Jack Napier and his poker-playing parties and friends. After Bruce is illegally drugged and Harvey Dent kidnapped, however, Bruce starts to realize that something is not quite right at Gotham High. In fact, something quite mysterious and suspicious is occurring at Gotham High.

Integration of Knowledge and Ideas

Explain how specific aspects of a text's illustrations contribute to what is conveyed by the words in a story.

Directions: Gotham High is a graphic novel; before reading, it is important to tell students that a graphic novel equally relies on both text and visuals to tell a story.

In order to help Bruce Wayne solve the mystery in Gotham High, students can create their own “Detective’s Journal.” Each students’ Detective’s Journal should leave space to include some or all of the following: Characters present and/or mentioned, Setting(s), Theme(s), Important Quotation(s), and, finally, Student Drawings of Key Visual Evidence.